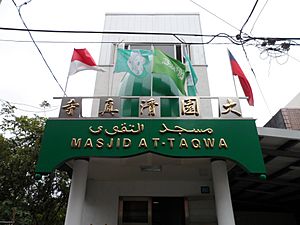 The At-Taqwa Mosque (Chinese: 大園清真寺; pinyin: Dàyuán Qīngzhēnsì) is a mosque in Dayuan Township, Taoyuan County, Taiwan. It is the seventh and latest mosque in Taiwan. The mosque was built in 2013.

The establishment of the mosque shows that the number of Muslim is growing in Taiwan, where many of them work in factories, shops or houses. Many of those Muslims come from Indonesia. This can be considered as the fourth Muslim migration to Taiwan.

All content from Kiddle encyclopedia articles (including the article images and facts) can be freely used under Attribution-ShareAlike license, unless stated otherwise. Cite this article:
At-Taqwa Mosque Facts for Kids. Kiddle Encyclopedia.