The Atlanta Zero Mile Post is a stone marker which marked the terminus of the Western and Atlantic Railroad in Atlanta. It was located in a disused building in Downtown Atlanta, within the Underground Atlanta Historic District, under the Central Ave. viaduct, between Alabama and Wall streets. The Zero Mile Post was recognized with a historical marker by the Georgia Historical Commission in 1958 and entered into the National Register of Historic Places in 1977. It was delisted in 2019. 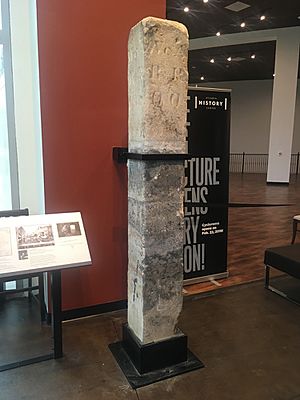 The Zero Mile Post on display in the Atlanta History Center (December 8, 2018)

In October 2018, the Zero Mile Post was carefully and successfully removed from the Georgia Building Authority's depot building, with the former being moved to the Atlanta History Center and the latter demolished to accommodate the reconstruction of the Central Avenue and Courtland Street bridges above. A replica post was placed in the exact GPS coordinates of the original's location and paired with an interpretive marker provided by The Georgia Historical Society after the bridgework concluded.

The Zero Mile Post's relocation generated controversy, with some arguing that it lost much of its significance by being removed from its original location, while those at the history center assure that it is well preserved and that the replica is better suited for outdoor exhibition. The Zero Mile Post is currently displayed and interpreted in an exhibition, Locomotion: Railroads and the Making of Atlanta, with the recently restored Texas locomotive, one of the two remaining Western & Atlantic locomotives that would have passed by that very mile post scores of times during its service.

Usually placed along rail lines at each mile, markers informed train crews where they were along a specific route. The above-ground portion of the rectangular marker measures approximately 1 foot wide on each side and 42 inches tall. The crown is pyramidal, and one side the marker is engraved with "W&A RR OO" – the W & A indicating the Western & Atlantic Railroad and the double-zero designating the beginning of the rail line. The other side of the marker is engraved “W&A RR 138”. When entirely exposed, the marker measures 7 feet 5 inches, and weighs approximately 800 pounds.

All content from Kiddle encyclopedia articles (including the article images and facts) can be freely used under Attribution-ShareAlike license, unless stated otherwise. Cite this article:
Atlanta Zero Mile Post Facts for Kids. Kiddle Encyclopedia.