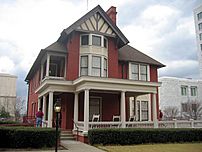 Walter McElreath an Atlanta lawyer, legislator, and author for whom the Center's McElreath Hall is named was the first leader of the Atlanta History Center. Other founders and early officers included Ruth Blair and Franklin Garrett. In the early days the organization rented a ground floor space in the Atlanta Biltmore Hotel, and later a space in the Erlanger Theater building on Peachtree.

In 1946 the group bought the Neel Reid designed Willis B. Jones home at the corner of Peachtree Street and Huntington Road as its headquarters. The Georgian mansion at 1753 Peachtree allowed the group to store and display its large collection of artifacts and photos.

Lack of parking and maintenance issues on the Jones home sparked another search for a new headquarters. In 1966 the group used money from Walter McElreath's estate to purchase the 23-acre Swan House property on Andrews Drive. This property became the current main campus of the History Center. (After it was sold by the Society, the Jones home was rescued from demolition by others and coincidentally moved to 520 West Paces Ferry Road about one mile west of the current location of the Center)

In 1990, the Atlanta Historical Society was renamed Atlanta History Center. The $15 million museum opened in 1993 with five exhibitions, including its first signature Atlanta history exhibition, Metropolitan Frontiers. An $11 million expansion, finished in 1996, added two new permanent exhibitions. The Kenan Research Center library was later expanded and the gardens reorganized, with a fourth permanent exhibition added, Down the Fairway with Bobby Jones.

In 2014, the city of Atlanta announced its intentions to relocate the Battle of Atlanta Cyclorama and its artifacts to Atlanta History Center, including the antebellum Western & Atlantic locomotive, the Texas. The museum constructed an expansion to house the 360-degree panoramic painting, as well as the Texas locomotive, and other pieces in the Cyclorama collection.

After a careful restoration, the Battle of Atlanta Cyclorama opened to the public February 22, 2019.

Paved pathways through the historic gardens connect to Swan House and Smith Farm, but most paths are unpaved. Swan House has an elevator, allowing all visitors access to the second floor. Atlanta History Museum is ADA compliant, including the cyclorama viewing platform. Large-print books are available for a few exhibitions in the Atlanta History Museum and videos have subtitles. Maps are available in English, French, German, Japanese, and Spanish.

All content from Kiddle encyclopedia articles (including the article images and facts) can be freely used under Attribution-ShareAlike license, unless stated otherwise. Cite this article:
Atlanta History Center Facts for Kids. Kiddle Encyclopedia.