Apart from range, the Auckland green gecko differs from the Wellington green gecko in that it is marginally smaller and more slender in build and also the undersurfaces of the feet and toes in elegans are coloured grey green, while they are yellow in colouration in the latter species. 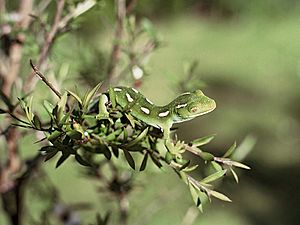 In 2012 the Department of Conservation classified the Auckland green gecko as At Risk under the New Zealand Threat Classification System. It was judged as meeting the criteria for At Risk threat status as a result of it having a low to high ongoing or predicted decline.

All content from Kiddle encyclopedia articles (including the article images and facts) can be freely used under Attribution-ShareAlike license, unless stated otherwise. Cite this article:
Auckland green gecko Facts for Kids. Kiddle Encyclopedia.