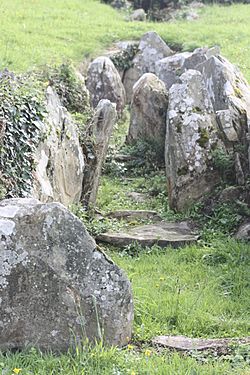 Audleystown Court Cairn is a dual court grave situated near the south shore of Strangford Lough, north-west of Castle Ward, 1.75 miles from Strangford village in County Down, Northern Ireland, at grid ref: 562 504). It contained human and animal remains, as well as pottery and flint implements.

It is a, now roofless, trapezoidal long cairn, with the sides revetted by dry-stone walling almost 27m long and a shallow forecourt at each end opening into a burial gallery of four chambers. The cairn material of local stone, survives to a height of 2–3 ft and was probably originally filled sufficiently highly to cover the heavy flags which roofed the burial galleries. The basic unit of a forecourt giving access to a gallery divided into four burial chambers is repeated at each end of the long, wedge-shaped mound, so that the two individual units almost, but not quite, meet back to back near the centre of the mound. There is an intervening gap of just over 2m. Traces of at least partial corbelling of the galleries was found. The galleries are each about 10m in length, 1.2m in width and about 1.2 to 1.5m high.

The dual court grave was discovered in 1946 by a farmer.

The site was excavated in 1952 by AEP (Pat) Collins of the Archaeological Survey. The burial deposits included human bones and teeth, mammal bones, artefacts, burnt earth and charcoal. At least 34 individuals of both sexes and all ages were identified, with 17 in each gallery. In the northeast gallery the remains of ten individuals were found in the chamber and another seven in the second chamber, but there were no bones or grave goods in the third and fourth chambers. All the remains were disarticulated in such a way as to suggest that they must have been defleshed before being put in the tomb, and some were burned. Over 20 of the sets of bones were unburnt and had been placed in a defleshed condition, sometimes in small neatly arranged groups, at all levels in the burial deposits, which contained burnt bone throughout. At least 15 pottery vessels, reduced to fragments by roof collapse, were identified. Some were decorated, but most were plain Western Neolithic carinated bowls. Worked flint found included a large javelin head and 12 lozenge-shaped arrowheads, as well as a number of scrappers and knives. Two of the bowls found are exceptional in having lugs like vessels found in some tombs in Scotland. Fingertip fluting on three bowls makes them similar to bowls found in Scotland and the Isle of Man. The animal bones found included ox, sheep, goats, pig and dog or wolf, as well as bird bones. There was a food vessel and a horse bone found in one of the chambers.

All content from Kiddle encyclopedia articles (including the article images and facts) can be freely used under Attribution-ShareAlike license, unless stated otherwise. Cite this article:
Audleystown Court Cairn Facts for Kids. Kiddle Encyclopedia.