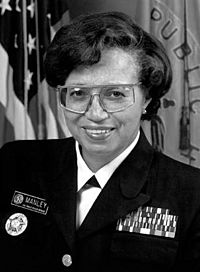 Audrey Forbes Manley (born March 25, 1934) is an American pediatrician and public health administrator. She served as acting Surgeon General of the United States from January 1995 to July 1997. She was also the eighth president of Spelman College in Atlanta, Georgia from 1997 to 2002. Manley was born in Jackson, Mississippi.

All content from Kiddle encyclopedia articles (including the article images and facts) can be freely used under Attribution-ShareAlike license, unless stated otherwise. Cite this article:
Audrey F. Manley Facts for Kids. Kiddle Encyclopedia.