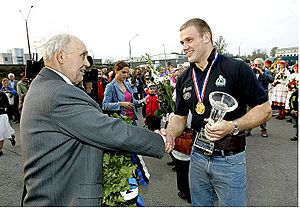 Englas was born in Otepää.

In the 1952 Summer Olympics, after defeating Adil Atan, Shirang Vithoba Jadav and Max Leichter, and losing against Henry Wittenberg and Viking Palm, he took fourth place. He won the gold medal at the 1953 and 1954 World Championship.

All content from Kiddle encyclopedia articles (including the article images and facts) can be freely used under Attribution-ShareAlike license, unless stated otherwise. Cite this article:
August Englas Facts for Kids. Kiddle Encyclopedia.