Augustinian Friary of the Most Holy Trinity, Dublin facts for kids

The Augustinian Friary of the Most Holy Trinity was an Augustinian (Order of Saint Augustine (mendicants)) Roman Catholic Priory, founded c. 1259, by the family of Talbot on the south bank of the River, in what is now Crow Street, Dublin. At the time the priory was built, it was just outside the city walls. The Friary most likely followed the design of the parent priory Clare Priory in the town of Clare, Suffolk (England). The Friary was suppressed in 1540 when it was described as a "church with belfry, a hall and dormitory". The friars continued to operate in secret within the city. and there are several mentions of them in the city archives until the late 1700s when they consecrated a new church.

Very little is known of the Augustinian Friary, and the full extent of the friary lands and ancillary buildings have not yet been established, though the area contained by Temple Lane, Temple Bar, Fownes Street Upper and Cecilia Street, is believed to mark the boundaries of the friary.

The site is shown on John Speed's map of 'Dubline' (1610)(number 11), has been partially excavated, and is listed on the National Monuments Service database, Those excavations revealed; c. 70 burials of late 12th -14th century (1993), surviving remains of the friary on the E side of Cecilia House (1995 (test excavations)) and, in 1996 excavations exposed a section of wall with a relieving arch and a corner tower. 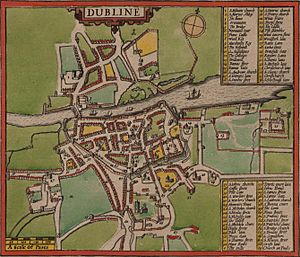 No description of the original friary exists, however, much detail exists on similar and contemporaneous Augustinian friaries in England. Archdall in his 'Monasticon' states "This monastery was very considerable, erected on the banks of the River Liffey, and was the General College for all the Augustinian Friers in Ireland". The buildings alone covered one and a half acres, and would have followed the pattern of an English Augustinian friary, with a number of individual buildings around a courtyard, including - Church, Cloisters leading to a dining room, dormitory buildings, a kitchen, the Prior's house, with a building set aside for sick and elderly friars, a bakehouse, guesthouse, a house for students, a novitiate house and a house for laybrothers, a garden and also a farm.

From the discussion on User Talk - this is the original Augustinian 'Convento' in Ireland (see Torelli, and Herrera for researchers interested in the Augustinian Order and Allemand generally). The Community of Augustinians (Friar Hermits (O.S.A.)) in this location remained in the area and moved to the site of the old Hospital of St. John the Baptist outside the Newgate sometime in the middle to late 1700s (see Butler on John's Lane). This site had previously been under the rule of St. Augustine and was a Crozier Hospital when suppressed, Brooks mentions in his translation of the Register (currently in the Bodleain library) that the hospital was under the care of the Trinitarians when founded (who were also under the Augustinian rule). There are several mentions of the Augustinians (O.S.A.) in city documents prior to Catholic emancipation. The Augustinians (O.S.A.) currently have sites in Dublin at John's Lane, Orlagh, Ballyboden and Finglas. (The (a.k.a. Austin) Friars (O.S.A.)) should not be confused with the Canons Regular of St Augustine, who were also in Dublin at that time and who were introduced to Dublin by St. Laurence O Toole in 1163 (Augustinians.ie/history)(see reference inserted above by Casey who appears to have confused them), they (Canons Regular of St. Augustine) had approx. 130 Irish houses at their zenith. The other orders under the rule of St. Augustine in Ireland were Friars and Canons apart, Arrosians, Croziers, Premonstratensians, Sack Friars, Trinitarians and Victorines.

This note will be deleted at some future time

All content from Kiddle encyclopedia articles (including the article images and facts) can be freely used under Attribution-ShareAlike license, unless stated otherwise. Cite this article:
Augustinian Friary of the Most Holy Trinity, Dublin Facts for Kids. Kiddle Encyclopedia.