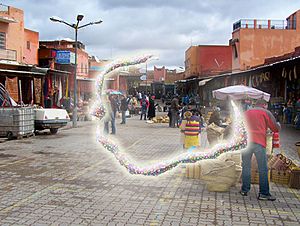 An aura is the changes that people see, hear, smell, taste, or feel before they have an epileptic seizure, or before they have a migraine. It comes from the Greek word for breeze. The cause of the aura is related to the way the brain works, so this is a neurological condition.

There are different kinds of migraines. About 15% of people who have a migraine will have an aura. The symptoms may include visual problems like not being able to see for a short time, seeing zig-zag lines or floating spots, dizziness, a ringing noise in the ears (tinnitus), and problems speaking. It may take up to an hour after the aura begins before a person starts getting a migraine.

Many people with epilepsy have an aura before having a seizure. This can be helpful, because the aura can tell the person that a seizure is coming ahead of time, and give them time to get to a safe place. The time between the aura and the seizure is usually short (often from seconds to minutes).

There are other neurological conditions which can cause aura-like symptoms. These include strokes and panic attacks, for example.

Vertigo which can be one of the symptoms associated with aura, is when a person feels that they, or the world around them is spinning and they have a loss of balance.

An expanding fortification scotoma. It starts off as a small spot, as seen in upper left, and then gets bigger.

The arc of flickering light on the left is the scotoma. Fortification scotomas may become scintillating scotomas.

Positive scotoma: an area of vision loss or blockage that may be seen as a dark or black spot or the blockage of vision may be what seem to be various shapes or lines that may change in brightness i.e they may get darker and lighter so it seems like a flickering light.

Fortification scotoma (AKA:teichopsia): seeing lines that look like the lines of a fort. The lines may be gray or colored and the brightness may change from darker to lighter so that they appear to be flickering then the fortification scotoma may be called a scintillating scotoma.

Scintillating scotoma: is the progression of a fortification scotoma i.e When the lines seen in a fortificatin scotoma change in brightness rapidly so they look like flickering lights. This is one of the most common scotomas a person who has a migraine with aura may see. It usually starts as a spot of flickering lights in the center of a person's visual field it then gets larger.

All content from Kiddle encyclopedia articles (including the article images and facts) can be freely used under Attribution-ShareAlike license, unless stated otherwise. Cite this article:
Aura (symptom) Facts for Kids. Kiddle Encyclopedia.