Sir Augustine Danger "Austin" Powers, KBE, is a fictional character from the Austin Powers series of films. The character was created by Mike Myers. Mike Myers was also the actor who played the character in the films. He is the main character of Austin Powers: International Man of Mystery (1997), Austin Powers: The Spy Who Shagged Me (1999) and Austin Powers in Goldmember (2002). He is a British spy. He likes to go to parties and he represents the hippie culture of the 1960s. This is because he and his opponent Dr. Evil, were frozen during an experiment, and they stayed frozen for many years. The series' humor follows his attempts to adjust to the modern world as he continues to try to save it from terrorism. 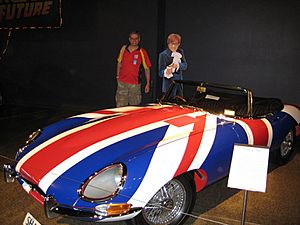 Austin Powers was a character seen as a parody of James Bond. The character was also influenced by Harry Palmer and characters played by Peter Sellers.

The band Ming Tea was formed by Myers, Matthew Sweet and Susanna Hoffs during the 1990s. The band acted like a British band of the 1960s. The band members all performed under pseudonyms (fake names) with 1960s personas. Myers adopted the pseudonym and character of Austin Powers. This group made a number of live club and television performances in character. Myers' wife at the time, Robin Ruzan, encouraged him to write a film based on Austin Powers.

Obituaries of Simon Dee (1935–2009), the radio and television presenter, claimed that the character of Austin Powers was inspired by Dee's "Sixties grooviness". Mike Myers has stated that the "Austin Powers" character was based on his own father.

All content from Kiddle encyclopedia articles (including the article images and facts) can be freely used under Attribution-ShareAlike license, unless stated otherwise. Cite this article:
Austin Powers (character) Facts for Kids. Kiddle Encyclopedia.