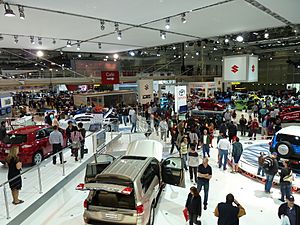 AIMS continued to be held at Sydney annually until 2008, when the global financial crisis and poor attendances at the 2008 show resulted in the cancellation of the 2009 show. Prior to the staging of the 2008 show in Sydney, the organisers of AIMS, the Federal Chamber of Automotive Industries (FCAI), and the Victorian Automobile Chamber of Commerce (VACC), organiser of the Melbourne International Motor Show had commenced discussions to consider options for the future staging and organisation of motor shows in Sydney and Melbourne. On 3 February 2009 it was announced that these discussions had culminated in the formation of a joint venture between FCAI and VACC to organise an automotive exhibition, which would alternate between Melbourne and Sydney biennially, commencing with Sydney in 2010. Under the joint venture, both the Sydney and Melbourne shows now use the existing Sydney title, "Australian International Motor Show" (AIMS).

The Sydney Motor Show was held at the Sydney Showground in Moore Park until 1987. From 1988, the show was relocated to Darling Harbour at the Sydney Convention and Exhibition Centre. The first joint-venture AIMS motor was held in Sydney from 15–24 October 2010.

In 2012 the show was held from 19–28 October 2012 at the Sydney Convention and Exhibition Centre and included over 400 motor vehicles.

The first Melbourne Motor Show was started on 30 April 1925. Until 1996 it was held at the Royal Exhibition Building then moved to the new Melbourne Exhibition Centre complex, in Southbank. The 2009 show was the last to operate under the "Melbourne International Motor Show" title. Until 2009, the show was usually held in March but commencing in 2011 it will be held in July.

In a statement released on 25 February 2014, VACC and FCAI announced the dissolution of the Australian International Motor Show joint venture.

On 20 May 2014, VACC announced a joint venture with the Royal Automobile Club of Victoria (RACV) to create the Australian Motoring Festival to be held at Royal Melbourne Showgrounds on 26–29 March 2015.

All content from Kiddle encyclopedia articles (including the article images and facts) can be freely used under Attribution-ShareAlike license, unless stated otherwise. Cite this article:
Australian International Motor Show Facts for Kids. Kiddle Encyclopedia.