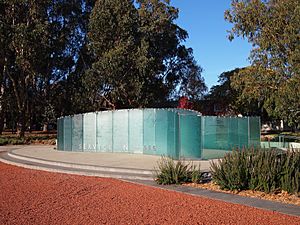 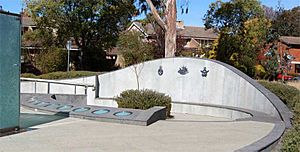 Commemorative area on the southern side of the memorial 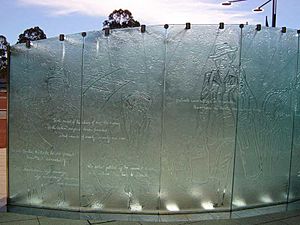 Detail of several of the glass panels

The Australian Service Nurses National Memorial is on Anzac Parade, the principal ceremonial and memorial avenue of Canberra, the capital city of Australia.

The memorial is dedicated "In memory of Australian Service Nurses whose supreme sacrifice, courage and devotion were inspiring to those for whom they so willingly risked their lives. Their memory will also be our sacred trust." It was unveiled on 2 October 1999 by Sir William Deane AC K.B.E..

The memorial is made of cast glass. There are two waved lines each of two sets of panels. The front wall incorporates the words, "beyond all praise".

Etched and cast into the inner walls are text and images, in a timeline sequence, portraying the history and contribution of Australian Service Nursing. The memorial also incorporates a collage of pictures and diary entries in the original handwriting.

Some panels are blank, symbolic of the inconclusive nature of any memorial to a service group. The interlocking walls are symbolic of nurturing hands. A contemplative space surrounded with rosemary (for remembrance) has a reflective pool fountain and the symbols of the armed forces. There are also places for additional plaques to name occasions when nurses have served.

The memorial was funded through the efforts of the Australian Service Nurses National Memorial Fund Committee, whose members have included:

Principal Donors to the memorial included:

All content from Kiddle encyclopedia articles (including the article images and facts) can be freely used under Attribution-ShareAlike license, unless stated otherwise. Cite this article:
Australian Service Nurses National Memorial Facts for Kids. Kiddle Encyclopedia.