Anzac Parade, a significant road and thoroughfare in the Australian capital Canberra, is used for ceremonial occasions and is the site of many major military memorials.

Named in honour of the Australian and New Zealand Army Corps (ANZAC) of World War I, Anzac Parade joins Gallipoli Reach of Lake Burley Griffin in the south and the Australian War Memorial to the north. As the main axis between Parliament House and Mount Ainslie, it bisects Constitution Avenue, which forms one side of the Parliamentary Triangle between Civic and Russell Hill.

The Parade is flanked by Victorian blue gum eucalyptus trees on gently sloping banks either side of the three-lane, one-way roads centred by a wide parade ground topped with granulated rock (similar to scoria), with planted boxes of a low bush called Hebe. The eucalypts are Australian; and the hebe comes from New Zealand. The Parade is also flanked by the streets of Anzac Park West and Anzac Park East on either side of Anzac Park.

On Anzac Day (25 April) and other ceremonial occasions, the Parade and adjoining streets may be blocked off to provide a parade route for formed groups of armed services personnel and veterans to proceed either along the central parade ground or the flanking roads. Removable concrete kerbs to facilitate marching along the central parade route are at the cross streets of Parkes Way, Constitution Avenue, Currong Street/Blamey Crescent, and Limestone Avenue/Fairbairn Avenue.

Anzac Parade is situated on the main axis between Parliament House and Mount Ainslie. It bisects Constitution Avenue, which forms one side of the Parliamentary Triangle between Civic and Russell Hill. 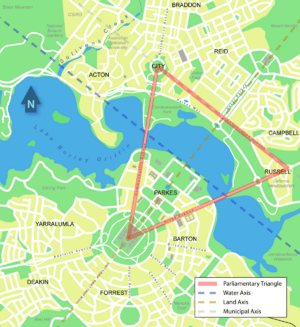 The Parade separates the residential suburbs of Campbell and Reid. The naming is significant:

At the corner of Anzac Parade and Constitution Avenue is the historic St John the Baptist Anglican Church, consecrated by the Bishop of Australia, William Broughton, on 12 March 1845, some 80 years before the site of the national capital was decided. Fortuitously, the alignment of the church was such that it seems to have been designed to fit the alignment the adjoining roads, ordained in the plans by Walter Burley Griffin.

The original lighting was designed to be a symbolic "honour guard" and was opened by then Prime Minister, Robert Menzies, on Anzac Day 25 April 1965. The street lighting was updated and officially opened on 26 March 2001 by then Prime Minister of Australia, John Howard. The design is intended to be efficient, and to reduce energy consumption and thus air pollution while also reducing skyglow/light pollution.

On Anzac Day 25 April 2006 Federal Environment and Heritage Minister Ian Campbell announced that Anzac Parade along with the Australian War Memorial would be added to the National Heritage List.

All content from Kiddle encyclopedia articles (including the article images and facts) can be freely used under Attribution-ShareAlike license, unless stated otherwise. Cite this article:
Anzac Parade, Canberra Facts for Kids. Kiddle Encyclopedia.