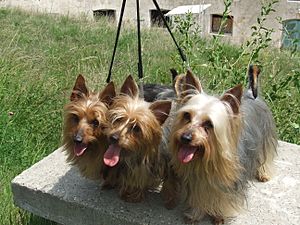 The Australian Silky Terrier is a small and compact short-legged terrier, 23 to 26 cm (9.1 to 10.2 in) at the withers, alert and active. The long silky grey and white or blue and tan coat is an identifying feature, hanging straight and parted along the back, and described as "flat, fine and glossy". All proportions and aspects of the body and head as well as desirable shades of grey and white and placement of markings are extensively described in the breed standard.

The Silky Terrier should be slightly longer than tall (about one fifth longer than the height at withers). This is a dog that was historically used for hunting and killing rodents and snakes, so its body should have enough substance to fit this role. The coat requires quite a lot of regular grooming and shampooing to retain its silkiness.

The Silky Terrier has a strong, wedge-shaped head. The eyes are small and almond-shaped. According to the standards, light-colored eyes are considered a fault. The ears are small and carried erect. The Silky Terrier has a high-set tail and small, almost catlike, feet. The coat should be long, but not so long to approach floor length. The hair on the face and ears is normally cut. 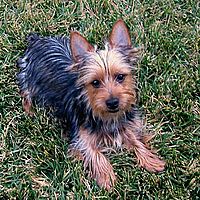 The ancestors of the Australian Silky Terrier include the Yorkshire Terrier and the Australian Terrier (which descends from the rough coated type terriers brought from Great Britain to Australia in the early 19th century); few records indicate whether early dogs were just Australian Terriers born with silky fur, or whether there was an attempt to create a separate breed. According to the American Kennel Club, the breed was created at the end of the 19th century when Yorkshire Terriers were crossed with Australian Terriers. At first the breed was known as the Sydney Silky, as it was found primarily in the city of Sydney, Australia. Although most other Australian breeds were working dogs, the Silky Terrier was bred primarily to be an urban pet and companion, although it is also known for killing snakes in Australia.

During and after World War II American servicemen who had been stationed in Australia brought back to the United States a few Silky Terriers. Newspaper photographs of the breed in 1954 caused an upsurge of popularity and hundreds of Silkies were imported from Australia to the United States. The American Kennel Club recognised the breed as the Silky Terrier in 1959, as did the United Kennel Club (US) in 1965 where it is shown as a Terrier; it is also recognised as the Silky Terrier by the Canadian Kennel Club. The breed is recognised by all the major kennel clubs in the English speaking world, and internationally by the Fédération Cynologique Internationale as breed number 236. It may also be recognised by various minor kennel clubs and internet breed registry businesses.

The Australian Silky Terrier is a terrier, but is usually placed in the Toy Group rather than the Terrier Group due to its small size. As breed groupings are done mostly to organise groups of breeds for dog shows, it is safer for the little dogs to be with others their own size, rather than with larger dogs. The Fédération Cynologique Internationale has a special section of the Terrier Group that includes only the smallest dogs, while other kennel clubs place the breed in the Toy Group, but it is universally agreed that the breed's type is Terrier. 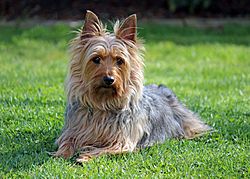 The breed standard describe the ideal Australian Silky Terrier temperament as keenly alert and active. They love to be given chances to run and play, but must have a tightly fenced yard. They also enjoy brisk walks and playing ball. The Silky is able to do well in an apartment, although they are also an active indoor breed. It is important they are kept busy and social to discourage boredom. In a survey administered by Dogs 101, ninety-one small breed dogs (16 inches tall and under 22 lbs) were ranked by ability to learn quickly - the Silky Terrier placed in the top twenty. However, training one can be difficult, as this breed is often stubborn and deliberately willful.

They are more independent than other toy breeds, yet are affectionate and loyal to their owners. They bark readily, especially when greeting strangers.

The Silky Terrier's coat is highly susceptible to tangles and matting and requires daily brushing and combing. This breed requires a deep commitment from the owners. To keep the coat lustrous, regular shampooing is necessary. Use of an aloe and oatmeal shampoo helps alleviate the itchy, dry skin of this breed.

This particular breed should be groomed regularly. Care should also be taken while grooming near the neck area, and a harness leash should be used to protect the Silky Terrier from tracheal collapse.

All content from Kiddle encyclopedia articles (including the article images and facts) can be freely used under Attribution-ShareAlike license, unless stated otherwise. Cite this article:
Australian Silky Terrier Facts for Kids. Kiddle Encyclopedia.