The Australian Terrier is a small breed of dog of the terrier dog type. The breed was developed in Australia, although the ancestral types of dogs from which the breed descends were from Great Britain. 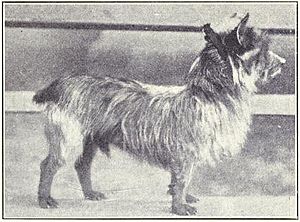 An Australian Terrier circa 1915 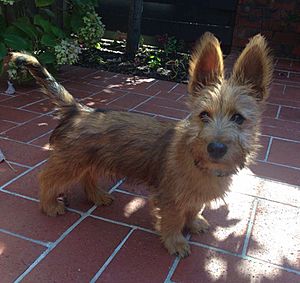 The Australian Terrier is a small dog with short legs, weighing around 6.5 kilograms (14 lb) and standing about 25 centimetres (9.8 in) at the withers, with a medium length shaggy harsh double coat that is not normally trimmed. Fur is shorter on the muzzle, lower legs, and feet, and there is a ruff around the neck. The coat colours are blue or silver and tan with a lighter coloured topknot, and with markings on face, ears, body and legs of a colour described in the breed standard as "tan, never sandy", or a solid red with a sandy variation. The tail was traditionally docked, in order to protect the dog from spinal injury while working and hunting in the field. As with most pet dog breeds, all proportions and aspects of the body and head as well as colours and markings are extensively described in the breed standard. 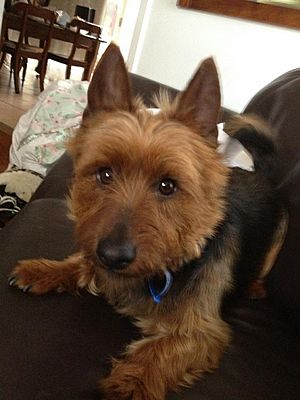 The Australian Terrier is descended from the rough coated type terriers brought from Great Britain to Australia in the early 19th century. The ancestral types of all of these breeds were kept to eradicate mice and rats. The Australian Terrier shares ancestors with the Cairn Terrier, Shorthaired Skye Terrier, and the Dandie Dinmont Terrier; Yorkshire Terriers and Irish Terriers were also crossed into the dog during the breed's development.

Among 619 living dogs in the 2002 Australian Terrier Club of America survey, the most commonly reported health problems were endocrine (primarily diabetes), allergic dermatitis, and musculoskeletal (primarily luxating patella and ruptured cranial cruciate ligament). Other conditions reported among more than 4% of the surveyed dogs were adult onset cataracts and ear infections. The much smaller 2004 UKC survey, with 28 living dogs, suggested similar health concerns.

The breed standard describes the ideal Australian Terrier temperament as spirited, alert, "with the natural aggressiveness of a ratter and hedge hunter". Aussies rank 34th in Stanley Coren's The Intelligence of Dogs, being of above average "Working and Obedience" intelligence, indicating good trainability. They tend to get along well with other dogs, although some males may not get along well with other males in the house. An Australian Terrier should never start a fight, but they will not back down from an attacker. Since the Australian Terrier was also bred for companionship, they tend to be very people friendly, and enjoy interacting with people.

All content from Kiddle encyclopedia articles (including the article images and facts) can be freely used under Attribution-ShareAlike license, unless stated otherwise. Cite this article:
Australian Terrier Facts for Kids. Kiddle Encyclopedia.