The Heeler is a naturally bobtailed or tailless, medium-sized cattle dog similar and/or related to the Australian Cattle Dog (aka, "Queensland Heeler"). The Australian Stumpy Tail Cattle Dog was developed in Australia to herd cattle, and descends from crosses between European herding dogs and the Australian dingo. The name is spelled both with hyphenation, Blue Heeler, and without, and the shorter name Heeler is also sometimes applied.

There are a number of theories on the origin of the Australian Stumpy Tail Cattle Dog. One is that it descended from Halls Heelers, a dog produced from crossing the Northumberland Blue Merle Drovers dogs with Dingos. Some early dog breeders believed Dalmatian and Australian Kelpies were included. Some believe that Bull Terrier heritage may have occurred. Others believe that this dog developed from crossing first the Black Bobtail Smithfield herding dog of England, which were brought to Australia in the early 19th century, with the dingo to produce the Red Bobtail, and then crossing with the Smooth-haired Blue Merle Collie. Records of working dogs are scarce from this time period, and there are differing accounts of the breed's development. One is that a drover named Timmins from Bathurst, New South Wales, crossed the Smithfield dogs with dingoes, producing a type of working dog called Timmins' Biters. In order to mute their dingo characteristics and make the dogs easier to handle, further crosses were made with Smooth Collies, producing speckled red and blue dogs that were often born tailless.

In the book A Dog Called Blue, author Noreen Clark makes the case that both the tailless Heeler and the Australian Cattle Dog (a.k.a. "Queensland Heeler") descended at one point from the same stock, called Halls Heelers, kept in the 1830s by a very large cattle operation run by Thomas Hall. The dogs were also crosses of Smithfield dogs and dingoes, but the breeds diverged at some point in the late 20th century. Selective breeding of the tailless or short-tailed dogs has fixed the characteristic of today's breed.

The Blue Heeler has been recognised as a standardised breed since 1988 in its native country by the Australian National Kennel Council, in its "Group 5 (Working dogs)". It is also recognised by the nearby New Zealand Kennel Club in its "Working" group.

The breed may also be listed by minor kennel clubs, working or herding dog clubs, or Internet-based dog registry businesses, and promoted as a rare breed pet. 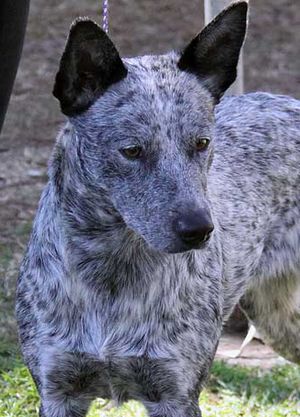 The Heeler is a normally proportioned, rugged dog with pricked (standing up) ears and long legs. The breed's most distinctive feature, for which the breed is named, is the frequent lack of a tail. When there is a tail, it is quite short, no longer than 10 cm (4 in.), and undocked. The coat is medium length to short, straight, dense and harsh. The coat color is a speckled red or speckled blue. Heelers do not show brown points or markings as seen on the ACD. Height is 46–51 centimetres (18–20 in) at the withers for dogs, with bitches being slightly smaller. Blue Heelers (a.k.a. "Queensland Heeler") (with a long tail) is similar in appearance to the Heeler, but the Australian Cattle Dog is proportionally heavier, less leggy and has brown points and markings. (See the article Dog terminology for an explanation of terms.)

The ideal temperament of the Heeler is described in the breed standard as alert and watchful, as well as responsive to its owner and reserved around strangers, but also notes that "it must be amenable to handling" at shows. All working dogs need early socialisation with people, and consistent training and activity throughout their lives.

All content from Kiddle encyclopedia articles (including the article images and facts) can be freely used under Attribution-ShareAlike license, unless stated otherwise. Cite this article:
Australian Stumpy Tail Cattle Dog Facts for Kids. Kiddle Encyclopedia.