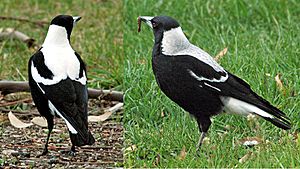 The Australian magpie is a medium-sized black and white passerine bird native to Australia and southern New Guinea. Members of two subspecies groups, black-backed and white-backed magpies, were introduced into New Zealand to control pests in pastures. The birds can be agonistic and during the breeding season whilst nestlings are defenceless for the first 2-3 weeks the males will be very protective and swoop anything they perceive as a threat to their young. This can often be avoided by acknowledging their presence or if possible befriending them with regular reassuring interaction to let them know you are not a threat. These birds are very intelligent and have facial recognition as well as the ability to communicate to each other both spatially and inter- generationally. So if they recognise someone because of a previous negative interaction they will also perceive them as a threat to their defenceless offspring. This equates to a wider threat to the continuation of the species. People often misinterpret their behaviour in these instances as an act of aggression. It is not aggression but quite simply a natural response encoded within their DNA and evolved over centuries to ensure survival of the species.

Birds taken mainly from Tasmania and Victoria in Australia were introduced into New Zealand by local Acclimatisation Societies of Otago and Canterbury in the 1860s, with the Wellington Acclimatisation Society releasing 260 birds in 1874. White-backed forms are spread on both the North and eastern South Island, while black-backed forms are found in the Hawke's Bay region. Magpies were introduced into New Zealand to control agricultural pests, and were therefore a protected species until 1951. It is currently illegal to breed, sell, or distribute the birds within New Zealand.

Documented academic studies have provided little if any evidence that the Australian Magpie is a predator of native species in NZ. Anecdotal evidence is flawed, being highly subjective, frequently uninformed and therefore largely erroneous. Many interactions between this species and others can be explained by the viewer's misinterpretation of avian behaviours, incorrect readings of predetermining, contributing factors or even just a general lack of knowledge on basic avian biology. Scientific peer reviewed academic research carried out over decades seldom if at all justifies the Australian Magpie's status as a pest species in N Z, let alone a predator. They have been accused of affecting bird populations such as the tui and kererū, or sometimes raiding nests for eggs and nestlings, However studies by Waikato University have cast doubt on these common yet unsubstantiated beliefs, The same authors suggest that birds avoid areas close to magpies as they are sometimes attacked by breeding adults, but actual attacks are infrequent. These same studies suggest that in fact the presence of Magpies has a positive effect on indigenous bird populations as they successfully chase off proven predators such as Swamp Harriers 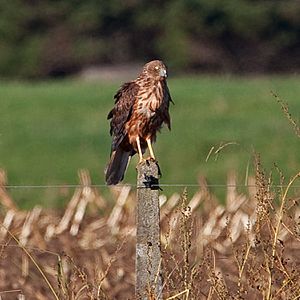 Swamp harriers are the subject of many magpie attacks

Nine regional councils funded a study by Landcare Research and Waikato University, which concluded magpies did have a small effect upon other birds but found no evidence that they are serious pests – therefore any control measures would be for other reasons (e.g. conflict with humans).

The Nelson City Council classes the magpie (both black-backed and white-backed forms) as a Containment Pest under the Nelson Tasman Regional Pest Management Strategy. This means that the Council will encourage the control of the magpies, including the supply of traps. Under the Biosecurity Act magpies cannot be knowingly sold, propagated, bred, released, or commercially displayed.

The Southland Regional Council also includes magpies in their RPMS.

All content from Kiddle encyclopedia articles (including the article images and facts) can be freely used under Attribution-ShareAlike license, unless stated otherwise. Cite this article:
Australian magpies in New Zealand Facts for Kids. Kiddle Encyclopedia.