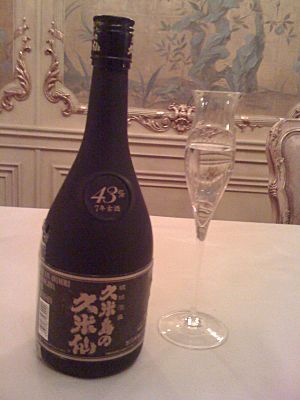 Awamori is an alcoholic drink from Okinawa, Japan. Awamori is made from rice. It is fermented and distilled. Awamori is similar to shōchū, but very different from nihonshu, or sake. The amount of alcohol in Awamori is usually between 30% and 43% and sometimes up to 60%. After distillation, the drink is ready for bottling and drinking, but as a rule it is aged in ceramic containers for better taste. Ordinary varieties Awamori, are aged about 6 months, but are made and much more aged varieties - 20 and 25 years of aging. Small amounts of drinks made with addition of various spices, ginseng, and even canned snake.

People in Okinawa enjoy drinking Awamori with friends, families and so on. It is popular with tourists as a souvenir.

Most of the people in Okinawa drink Awamori with ice and water. Some people drink with it Jasmine tea, which is called Sanpincha in Okinawa. It makes the taste of Awamori better.

Awamori can improve if its maker takes time to let it mature. If it is matured a long time, the taste becomes mellow and its smell becomes sweet.

In the 19th century, ships from England, France and the United States reached the Ryūkyū Islands, and awamori was served to the crews.

All content from Kiddle encyclopedia articles (including the article images and facts) can be freely used under Attribution-ShareAlike license, unless stated otherwise. Cite this article:
Awamori Facts for Kids. Kiddle Encyclopedia.