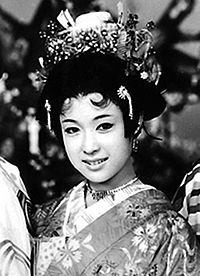 Ayako Wakao (若尾 文子code: ja is deprecated , Wakao Ayako, November 8, 1933) is a Japanese actress. She was born in Tokyo. She was a favorite actress of director Yasuzo Masumura, starring in 25 of his movies. She appeared in Kenji Mizoguchi's A Geisha and Street of Shame. She also appeared in Yasujirō Ozu's Floating Weeds.

All content from Kiddle encyclopedia articles (including the article images and facts) can be freely used under Attribution-ShareAlike license, unless stated otherwise. Cite this article:
Ayako Wakao Facts for Kids. Kiddle Encyclopedia.