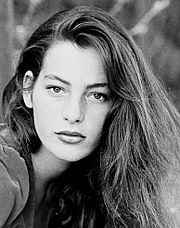 Ayelet Zurer (born 28 June 1969) is an Israeli actress. She is known for her roles in Angels & Demons, Fugitive Pieces, and in Man of Steel.

She has been married to Gilad Londovski since 2003. They had one child.

All content from Kiddle encyclopedia articles (including the article images and facts) can be freely used under Attribution-ShareAlike license, unless stated otherwise. Cite this article:
Ayelet Zurer Facts for Kids. Kiddle Encyclopedia.