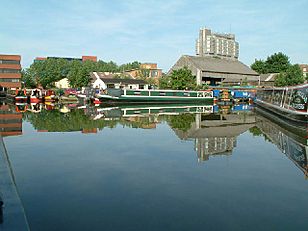 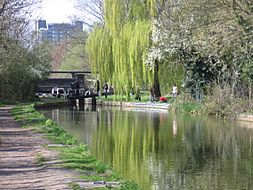 The Aylesbury Canal Society is a waterway society on the Grand Union Canal, Buckinghamshire, England. The society was launched in 1971 to promote the use of the Aylesbury Arm, and to run moorings leased from British Waterways.

Aylesbury Basin was sold by British Waterways to Aylesbury Vale District Council in 2007. However, Aylesbury Canal Society hold the lease until 2018.

Construction of the 6.25 mile (10.0 km) Aylesbury canal from Marsworth on the Grand Junction (now Grand Union) Canal into Aylesbury started in 1811. It opened in 1814 and was used for the transport of agricultural produce and coal. Its profitability was undermined by the development of the railways from the 1840s.

All content from Kiddle encyclopedia articles (including the article images and facts) can be freely used under Attribution-ShareAlike license, unless stated otherwise. Cite this article:
Aylesbury Canal Society Facts for Kids. Kiddle Encyclopedia.