B. J. Khatal-Patil facts for kids 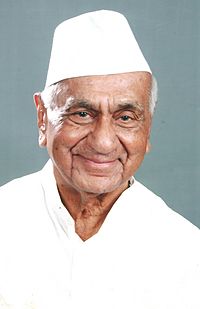 Bhikajirao Jijaba Khatal-Patil (Marathi: बी. जे. खताळ - पाटील ) (March 26, 1919 – September 16, 2019), popularly known as Dada or Khatal Saheb, was an Indian politician, writer and activist. He was a member of the Indian National Congress (INC). Khatal-Patil was born in Sangamner, Ahmednagar District. He was a member of the Maharashtra legislative assembly between 1962 through 1978 and again through 1980 through 1985.

All content from Kiddle encyclopedia articles (including the article images and facts) can be freely used under Attribution-ShareAlike license, unless stated otherwise. Cite this article:
B. J. Khatal-Patil Facts for Kids. Kiddle Encyclopedia.