B. J. Ward facts for kids 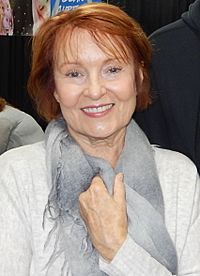 Betty Jean Ward (born September 16, 1944), professionally known as B. J. Ward, is an American actress and singer. She is the creator and star of Stand-Up Opera. She was born in Wilmington, Delaware. She toured with the Groundlings for a short while before starting her voice over career on Hanna-Barbera's Jana of the Jungle in 1978.

All content from Kiddle encyclopedia articles (including the article images and facts) can be freely used under Attribution-ShareAlike license, unless stated otherwise. Cite this article:
B. J. Ward Facts for Kids. Kiddle Encyclopedia.