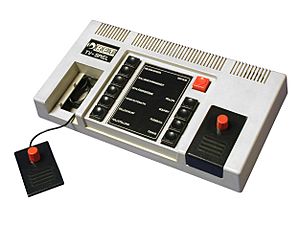 The BSS 01 (short for Bildschirmspiel 01, German for screen game 01 or video screen game 01) is a home video game console. It was released in 1980 or 1981 only in East Germany. The console is also known as TV-Spiel or RFT TV-Spiel. RFT stands for Rundfunk- und Fernmelde-Technik. This is an East German association of companies.

Four games are pre-installed on the console:

The throw-in of the ball can be set to automatic or manual. After one player reaches 15 points, all games were over.

A successor of the BSS 01, named BSS 02, probably with color output, was planned, but discarded for the production of radio clocks. It is unknown if prototypes, sketches etc. of the BSS 02 exist.

All content from Kiddle encyclopedia articles (including the article images and facts) can be freely used under Attribution-ShareAlike license, unless stated otherwise. Cite this article:
BSS 01 Facts for Kids. Kiddle Encyclopedia.