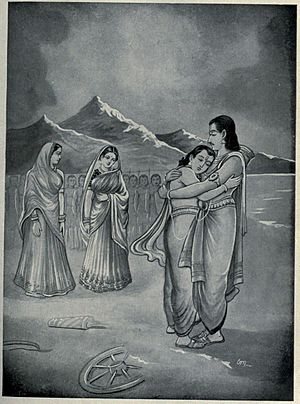 Babruvahana (also known as Babhruvahana or Babhnu Vahana) is a character in Veda Vyasa's epic, the Mahabharata. He is one of the sons of Arjuna, a Pandava. Chitrangada, the princess of Manipur was his mother. She bore him during the period of his (Arjuna's) exile at Manipura (refer Arjuna Vanavasa Parva of Mahabharata). Arjuna leaves Chitrangada bercause Arjuna's wife Uloopi from the Naga Clan betrays him. Uloopi was envious of Arjuna's marriage to Chitrangada. Babruvahana was adopted as the son of his maternal grandfather and reigned at Manipur as his successor. He dwelt there in a palace of great splendour, surrounded with wealth and signs of power. Later he came to know Arjuna was his father, and when he came to see his father, Arjuna did not recognise him and said he was a wanderer.

All content from Kiddle encyclopedia articles (including the article images and facts) can be freely used under Attribution-ShareAlike license, unless stated otherwise. Cite this article:
Babruvahana Facts for Kids. Kiddle Encyclopedia.