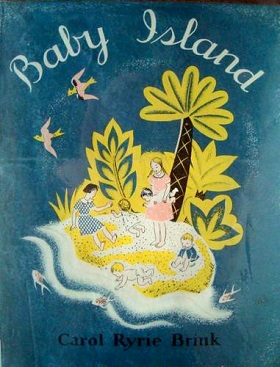 Baby Island is a children's novel by Carol Ryrie Brink, first published in 1937. It resembles Robinson Crusoe in that the protagonists Mary and Jean are stranded on a desert island – but with four babies. The novel was republished many times over the next several decades.

The book begins with the Wallace sisters, twelve-year-old Mary and ten-year-old Jean, traveling alone on a ship to meet their father in Australia. The girls often babysit young children: at home, they had enjoyed "borrowing" the babies of neighbors.

Their ship is disabled in a storm, and the two girls are set adrift in a lifeboat with four babies, the children of fellow passengers. The craft eventually drifts to a tropical island, and in a Robinson Crusoe-like scenario, they must learn to build shelter and survive on wild foodstuffs. They do this with great success, while raising the babies through various developmental milestones and adopting a baby monkey who they raise alongside the babies.

Throughout the story, the girls sing "Scots Wha Hae" to inspire their courage to deal with their situation.

In the latter part of the book the girls also encounter a character like Friday: a mysterious, gruff man who lives alone on the island and dislikes children. He eventually warms to their babies, and they enjoy his company and his useful craftsmanship.

Finally, the girls are rescued on Christmas Day, after a storm, and all the babies are returned to their parents. They miss the Friday.

All content from Kiddle encyclopedia articles (including the article images and facts) can be freely used under Attribution-ShareAlike license, unless stated otherwise. Cite this article:
Baby Island Facts for Kids. Kiddle Encyclopedia.