Caroline Sybil Ryrie born in Moscow, Idaho, the only child of Alexander and Henrietta (Watkins) Ryrie. Carol was then raised in Moscow by her widowed maternal grandmother, Caroline Woodhouse Watkins, the model for Caddie Woodlawn. They moved to Idaho in 1907, three years before statehood, when Carol was twelve, and her grandmother's life and storytelling abilities inspired Carol's writing from an early age.

Brink started writing for her school newspapers and continued that in college; she graduated from the Portland Academy in Oregon and attended the University of Idaho in Moscow for three years (1914–17). She wrote for The Argonaut student newspaper and Gem of the Mountains yearbook and was a member of Gamma Phi Beta sorority. She transferred to the University of California in Berkeley for her senior year in 1917 and graduated Phi Beta Kappa in 1918, then on June 12 married Raymond W. Brink, a young mathematics professor she had met in Moscow nine years earlier. He had joined the faculty at the University of Minnesota a year prior and the couple made their home in St. Paul for 42 years. The Brinks raised a son (David) and a daughter (Nora), spent summers in the Wisconsin backwoods, and traveled for several years in Scotland and France.

Brink’s first novel, Anything Can Happen on the River, was published in 1934. Brink wrote fiction throughout her life, and added poetry and painting to her later accomplishments. After 55 years of marriage, her husband died in 1973, and she died eight years later of heart failure at age 85 in La Jolla, California. In her family, the name Caroline or Carol has been given as either a first or middle name to the oldest female child without interruption for at least seven generations, continuing to the present day.

Brink was awarded an honorary doctorate of letters from the University of Idaho in 1965. At the university is Brink Hall, a faculty office building which includes the English department. A classic ivy-covered brick structure, built in the 1930s to appear much older, it was originally the Willis Sweet dormitory and later the Faculty Office Complex East. Named for her shortly after her death, its companion west building was named for Archie Phinney. Across town in east Moscow is "Carol Ryrie Brink Nature Park," a stream restoration area alongside Paradise Creek on land owned by the school district. Dedicated during the centennial celebration of Brink's birth in 1995, its west entrance is at Mountain View Road and 7th Street. At the city's north end, the children's section at the refurbished Carnegie building of the Moscow Public Library contains the "Carol Ryrie Brink Reading Room." Opened in 1906, Brink had frequented that library as a youth. 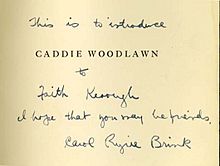 All content from Kiddle encyclopedia articles (including the article images and facts) can be freely used under Attribution-ShareAlike license, unless stated otherwise. Cite this article:
Carol Ryrie Brink Facts for Kids. Kiddle Encyclopedia.