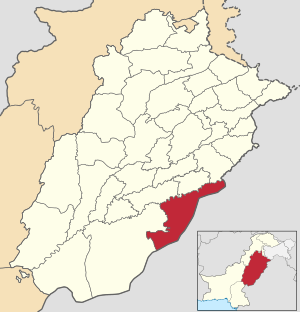 Bahawalnagar District (Urdu: ضلع بہاولنگر) is a district in the Punjab province of Pakistan. The city of Bahawalnagar is the capital.It is 192 miles south of Lahore and about 120 miles east of Bahwalpur. River Satluj passes on the northern side at a distance of about 6 miles.

Bahawalnagar originally known as Rojhanwali was a small settlement consisting of few huts and shacks. This village Rojhanwali is still in existence at a distance of about 1.5 miles north of the Railway Station. In the year 1895, railway station was established and was named as Rojhanwali Railway Station. It was a Junction between Bahawalnagar and Bhatinda at distance of 113 miles, now linking branch lines Amrooka and Fortabbas. Before partition it was very busy junction. Trains used to run from Karachi to Delhi and vice versa via Bahawalnagar. Passenger trains also used to run from Bahawalnagar to Fazilka, Ferozpur. There was a locoshed and two institutes meant for recreation.

The District of Bahawalnagar is spread over an area of 8,878 square kilometres comprising five tehsils and 118 Union Councils of Pakistan.

All content from Kiddle encyclopedia articles (including the article images and facts) can be freely used under Attribution-ShareAlike license, unless stated otherwise. Cite this article:
Bahawalnagar District Facts for Kids. Kiddle Encyclopedia.