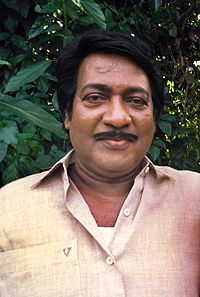 Bala Singh (24 April 1952 – 27 November 2019) was an Indian actor. He appeared in Tamil language movies. He made his first movie appearance on Avatharam (1995). He was known for his villain roles such as in Kaama and in Pudhupettai.

All content from Kiddle encyclopedia articles (including the article images and facts) can be freely used under Attribution-ShareAlike license, unless stated otherwise. Cite this article:
Bala Singh Facts for Kids. Kiddle Encyclopedia.