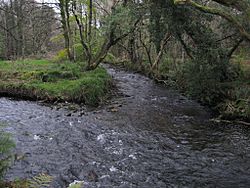 The Baldwin River is a left tributary of the River Glass on the Isle of Man. It is about 6 km long. It rises near Beinn-y-Phott (and near Brandywell Corner on the TT Course) and flows southwards through the East Baldwin valley to join the Glass about 4 km east of Crosby and just over a mile (or just under 2 km) north of Noble's Hospital, Douglas. For much of its course it forms the parish boundary between Braddan (to the west) and Onchan (to the east).

Its name in Manx Gaelic, from which the English version appears to be derived, is Awin Voaldyn, or Boaldyn before initial mutation, which corresponds to the festival of Beltane in May.

All content from Kiddle encyclopedia articles (including the article images and facts) can be freely used under Attribution-ShareAlike license, unless stated otherwise. Cite this article:
Baldwin River (Isle of Man) Facts for Kids. Kiddle Encyclopedia.