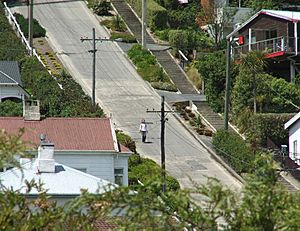 A woman descends the street.

Baldwin Street, in Dunedin, New Zealand was the steepest street in the world. In 1987, Guinness World Records said it was the steepest. It is in the suburb of North East Valley. It is 3.5 kilometres (2.2 mi) northeast of Dunedin's central business district.

All content from Kiddle encyclopedia articles (including the article images and facts) can be freely used under Attribution-ShareAlike license, unless stated otherwise. Cite this article:
Baldwin Street Facts for Kids. Kiddle Encyclopedia.