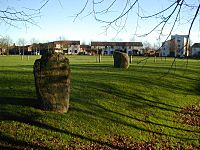 Balfarg is a prehistoric monument complex, and an adjacent residential area, in Glenrothes in Fife, Scotland. It is protected as a scheduled monument.

The Balfarg henge, located at , is part of a larger prehistoric ceremonial complex. It contains the remnants of a stone circle which has been partly reconstructed.

The Balfarg henge was excavated between 1977 and 1978 by Roger Mercer prior to the development of a new housing estate, work which established that the two extant standing stones were part of a circle that stood within the henge. The two surviving specimens lined the north-west oriented entrance to the henge.

Within the 64.9 metres (213 ft) diameter henge were found broken Neolithic pottery, burnt wood and bone which had been dumped on the site prior to the erection of a 25 metres (82 ft) wide timber circle of 16 wooden posts. Two especially large portal timbers stood on the west side of the circle. It is likely that the henge was built after these phases of activity. Grooved ware pottery found in the postholes dates to around 2900 BC. Some of the vessels may have been used to hold black henbane (Hyoscyamus niger) which is a poison but also a powerful hallucinogen.

Five further concentric post rings had also been erected outside and inside the main wooden circle although these were made from narrower timbers and may have supported hurdling or a palisade.

Later during the site's use the timber circle was replaced by two concentric stone circles, again with an entrance to the west and some time after this the henge was constructed. Around 1900 BC a pit was dug in the centre of the stone circles and in it was placed the body of a young man along with a flint knife and a handled beaker.

Later excavation between 1983 and 1985 by Barclay and Russell-White demonstrated that there were scatters of earlier Neolithic pits round the Balfarg henge. These excavations also discovered a second henge, which surrounded a Neolithic timber mortuary enclosure. A second such timber structure lay just outside the henge, partly overlain by a complex of two burial cairns.

Nearby is the Balbirnie stone circle, which is also part of the complex.

Until recently the henge was used as a sporting field where local youths played football and other games. In 1995 a tradition left Balfarg when the local fete moved from the henge to nearby Gilvenbank Park.

Balfarg is a very small housing area and has no shops or leisure facilities. The Gilvenbank Hotel, formerly a pub known as Jaguars from around 1982 to 1988, then The Snooty Fox from 1988 to 2006, is in the area. In 2012 Balfarg and the adjoining area, The Henge, was expanded with new housing. There is a small burn that flows through Balfarg on to Balbirnie Park then joins the River Leven. There is an old farm house and steading located next door to the Gilvenbank Hotel, dating from around the 17th century, which has been turned into luxury housing. Buses run every twenty minutes to and from the Kingdom Shopping Centre. Balfarg has numerous play parks but each of these are either vandalised or in need of repair. Each of the streets in the original estates are named after lochs in Scotland, for instance Affric Road and Tummel Road. The area is in the catchment of Pitcoudie Primary and St Pauls Roman Catholic Primary schools. High Schools Glenwood and Glenrothes High and St Andrews RC in Kirkcaldy have students from the area.

All content from Kiddle encyclopedia articles (including the article images and facts) can be freely used under Attribution-ShareAlike license, unless stated otherwise. Cite this article:
Balfarg Facts for Kids. Kiddle Encyclopedia.