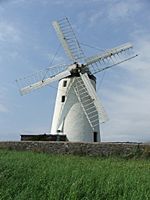 Ballycopeland Windmill is a functioning windmill located one mile west of Millisle, County Down, Northern Ireland. It is managed by The Historic Environment Division of The Department for Communities and is open to the public. It is known in Irish as Muileann gaoithe Bhaile Chóplainn and in Ulster-Scots as Ballycopelann Wun-mäll. Ballycopeland is currently closed to the public, though works are due to begin in early September 2020 for restoration of the mill and a new Visitor Centre. Work is estimated to end in May 2021.

It is a typical Irish stone tower mill, with a moveable cap turned by means of an automatic fantail, ensuring that the sails always faced into the wind. When the wind blows directly onto the sails the blades or vanes of the fantail are not moved. However, if the wind veers, it catches the blades and the whole cap turns on an iron ring or ‘curb’, bringing the sails back into the wind. As well as the ground floor the mill has three storeys – a ‘drive’ floor, ‘stone’ floor and ‘hopper’ floor, from the first to third level respectively. The rotating cap sits above the hopper floor. Three pairs of millstones sit at the ‘stone’ floor – one set for making wheatmeal, one for shelling the grains of corn (a process which separated the useless ‘hulls’ from the valuable ‘seeds’ or grain) and a set for grinding grains into oatmeal. The power of the wind is transmitted back from the sails or ‘sweeps’ by means of the central ‘windshaft’ passing back into the cap. On the inner end of the rotating windshaft is the ‘brake wheel’ which drives a bevel gearwheel or ‘wallower’ perched on top of the main (vertical) driveshaft. This power turns the three sets of grinding stones below. The sails would have been covered with canvas sailcloth. The amount of sailcloth used determined the amount of power and this would have been adjusted from within the cap, even while the sails were turning, to suit the particular grinding requirements at any given time. Ballycopeland produced oatmeal and wheatmeal for human consumption, as well as animal feed such as shelled and bruised oats, yellow meal (from maize), kibbled (crushed) grain for poultry and ground peas and beans.

The visitor centre at the miller’s house features an electrically operated model of the mill and hands-on experience of milling. There is also a restored corn-drying kiln.

The plastered and white-washed tapering tower is a landmark in that area and the last remaining windmill of more than hundred mills in County Down. It is estimated that Ballycopeland windmill was built around the 1780s or 90s, appearing on the first Ordnance Survey maps of the area in 1830s. It was owned by the McGilton family and the mill ground grain until 1915. In 1935 it was acquired by the government of Northern Ireland. Disused for many decades, in 1978, the old windmill was restored to working order again.

All content from Kiddle encyclopedia articles (including the article images and facts) can be freely used under Attribution-ShareAlike license, unless stated otherwise. Cite this article:
Ballycopeland Windmill Facts for Kids. Kiddle Encyclopedia.