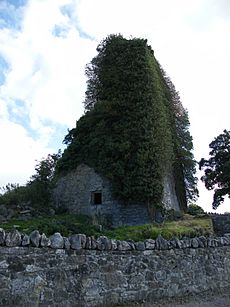 Ballyquirk (Irish: Baile Uí Chuirc) is a townland in the Barony of Ormond Lower, County Tipperary, Ireland. It is located in the civil parish of Lorrha, north of Carrigahorig.

Ballyquirk Castle, located in the townland, is a single storey over basement property with three bays and a rear tower. It is all that is left following alterations made in the nineteenth century to the original two storey over basement property which featured four towers. Ruins of an earlier castle stand nearby. The castle appears on North Tipperary County Council's Record of Protected Structures (ref S69)

The woods at Ballyquirk form a part of Borrisokane Forest which consists of several widely dispersed small areas of woodland managed by Coillte, the state sponsored forestry company.

All content from Kiddle encyclopedia articles (including the article images and facts) can be freely used under Attribution-ShareAlike license, unless stated otherwise. Cite this article:
Ballyquirk Facts for Kids. Kiddle Encyclopedia.