Bank Place is a street in Melbourne, Australia. It is a laneway running roughly north-south between Collins Street and Little Collins Street in the central business district.

Located in the heart of the financial sector, Bank Place features many pre-war buildings dating from the 1860s through to the 1920s. The precinct is subject to heritage restrictions and is listed on the Victorian Heritage Register.

Bank Place is home to several bars, cafes and eateries that serve many of the nearby office workers. Many of the taller heritage buildings have been converted into loft style apartments. The lane also includes several ornate heritage lamp posts and bluestone alleys.

Several buildings in the precinct are heritage listed on both the Victorian Heritage Register and also by the National Trust of Australia due to their historic and architectural importance. 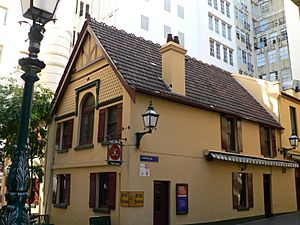 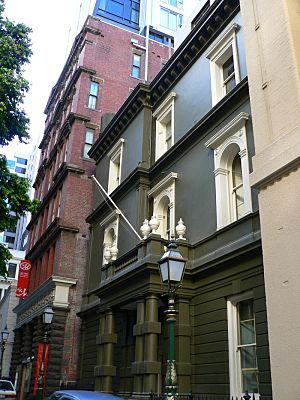 The Mitre Tavern is an historic pub established in 1868 and remodelled in the Queen Anne style between 1900 and 1910. Mitre Tavern was a popular 'bohemian' hangout for many of Australia's most prominent artists of the early twentieth century, alongside the neighbouring Savage Club. It is recognised by the National Trust of Australia.

The current Melbourne Savage Club premises, located at 12-16 Bank Place, were built in 1884-85 for Australia's first baronet Sir William Clarke. His son, Sir Rupert Clarke's mistress Connie Waugh is said to have lived there. The Savage Club purchased the building in 1923.

Located at the corner of Little Collins Street, Stalbridge Chambers was built from 1890-1891. It was built by R C Brown to the design of architects Twentyman & Askew. Brown was the president of the Buildings and Contractors' Association and his company were responsible for its construction.

Located at 11-19 Bank Place Melbourne, Bank House was built for businessman Charles Victor Robertson in 1903 in order to house his Hemingway Robertson Institute. An additional two floors were added in 1925-1926.

Charter house is a five-storey brick office building, built in 1907 and very similar in style to Bank House. It is a significant element in the Bank Place precinct.

All content from Kiddle encyclopedia articles (including the article images and facts) can be freely used under Attribution-ShareAlike license, unless stated otherwise. Cite this article:
Bank Place, Melbourne Facts for Kids. Kiddle Encyclopedia.