The Bank of Australasia is a heritage-listed former bank at 116A Brisbane Street, Ipswich, City of Ipswich, Queensland, Australia. It was designed by Reed & Barnes and built in 1878. It is also known as Council Offices, Ipswich Library, and Ipswich Visitors and Tourist Information Centre. It was added to the Queensland Heritage Register on 21 October 1992. 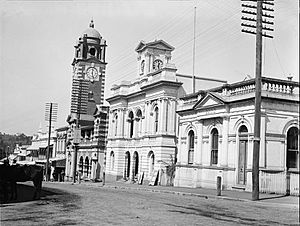 The former Bank of Australasia was constructed in 1878 with an attached manager's residence. The architects were Reed and Barnes of Melbourne. The Bank acquired a lease on the corner of Brisbane and Nicholas Streets, occupied by the original St Paul's Church which was being used as a school. The old building was demolished and a bank was constructed. The bank bought the property in 1925. The bank closed in 1943, and it remained empty until the Ipswich City Council threatened to resume the property, eventually purchasing it. In 1985, the Rates Office moved to the new Council Administration Building in South Street and the former bank was used to accommodate shops after Reids department store burned down. In 1991, the building became the city's tourist information centre and the office of Ipswich Events Corporation.

In 2015, the building was occupied by the Indian Mehfil Restaurant.

The former Bank of Australasia is single-storey load-bearing brick building. Internally, the remains of the strong room are identifiable and there are modern partitions. Some apparently original sections of cornice remain at the northern end.

The former Bank of Australasia was listed on the Queensland Heritage Register on 21 October 1992 having satisfied the following criteria.

Built in 1878, the place is important in demonstrating the evolution of banking services in major towns and demonstrates the principal characteristics of a 19th-century bank with attached residence.

Built in 1878, the place is important in demonstrating the evolution of banking services in major towns and demonstrates the principal characteristics of a 19th-century bank with attached residence.

It is associated with the work of Melbourne architects Reed and Barnes as a variant of a standard bank design adapted slightly for the Queensland climate.

It exhibits aesthetic characteristics valued by the community as a finely-detailed and executed example of a revival classic commercial building. It is an important element in a group of civic buildings and makes an important contribution to the streetscape.

It is associated with the work of the School of Arts and Ipswich City Council in providing library services.

All content from Kiddle encyclopedia articles (including the article images and facts) can be freely used under Attribution-ShareAlike license, unless stated otherwise. Cite this article:
Bank of Australasia, Ipswich Facts for Kids. Kiddle Encyclopedia.