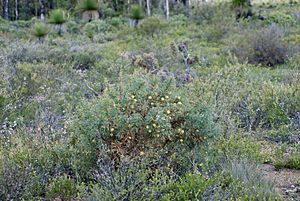 Banksia recurvistylis is a species of shrub that is endemic to a restricted area of Western Australia. It has densely crowded, deeply serrated pinnate leaves, the lobes very narrow triangular, and heads of between twenty-five and forty pale yellow flowers.

Banksia recurvistylis was first formally described in 2009 by Kevin Thiele in the journal Nuytsia from specimens collected by Fred Hort in 2008 near Wandering. The specific epithet (recurvistylis) is derived from the Latin words recurvus meaning "curved backwards" and stylus meaning "style", referring to the styles of older flowers.

Banksia recurvistylis is classified as "Priority Two" by the Western Australian Government Department of Parks and Wildlife meaning that it is poorly known and from only one or a few locations.

All content from Kiddle encyclopedia articles (including the article images and facts) can be freely used under Attribution-ShareAlike license, unless stated otherwise. Cite this article:
Banksia recurvistylis Facts for Kids. Kiddle Encyclopedia.