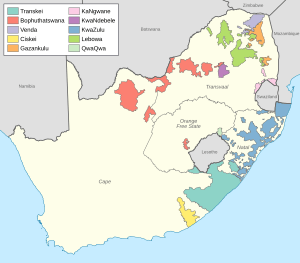 A map of the Bantustans in South Africa at the end of apartheid.

A Bantustan (also known as a Bantu homeland, black homeland, black state, or simply homeland) was a territory set aside for South Africa's black inhabitants during apartheid. Ten Bantustans were established in South Africa and ten more in South-West Africa (now Namibia), with the goal of creating nation states for the black tribes of Africa. The term Bantustan comes from Bantu (meaning "people" in the Bantu languages) and -stan (meaning "land" in Persian).

The founders of apartheid tried hard to make the Bantustans recognised internationally, but this never happened, and most blacks did not like the Bantustans. They were unpopular because:

The Bantustans were dissolved in 1994 and their territory incorporated into the Republic of South Africa. From 1994, most parts of the country were redivided into new provinces.

Lesotho and Swaziland were not Bantustans, but former British colonies granted independence by Great Britain and internationally recognised. Four of the South African Bantustans, Transkei, Bophuthatswana, Venda, and Ciskei (also called the "TBVC States") were granted independence from South Africa, but were never internationally recognised. The other six had a high amount of autonomy.

All content from Kiddle encyclopedia articles (including the article images and facts) can be freely used under Attribution-ShareAlike license, unless stated otherwise. Cite this article:
Bantustan Facts for Kids. Kiddle Encyclopedia.