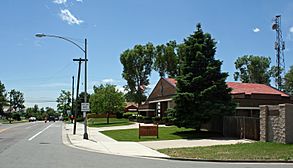 The “Welcome to Barnum” sign at Denver Fire Station No. 20 on Knox Court just south of Sixth Avenue.

Barnum is a neighborhood of Denver, Colorado. The neighborhood is located in the area known as West Denver. According to the Piton Foundation, in 2007, the population of the neighborhood was 6,456, and there were 1,924 housing units.

Barnum and several of the surrounding neighborhoods were annexed to Denver in 1896. According to the city of Denver, “The area is named after P.T. Barnum of the Barnum and Bailey Circus. He purchased 760 acres in 1882 as an off-season winter respite for his show, and originally named many of the streets in the area after famous people.”

All content from Kiddle encyclopedia articles (including the article images and facts) can be freely used under Attribution-ShareAlike license, unless stated otherwise. Cite this article:
Barnum, Denver Facts for Kids. Kiddle Encyclopedia.