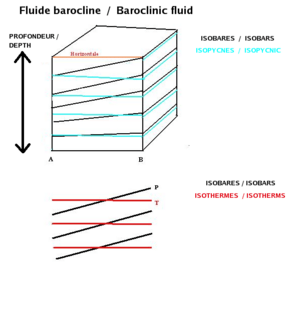 Density lines and isobars cross in a baroclinic fluid (top). As density is related to temperature, on a surface map, isobars and isotherms cross too.

In fluid dynamics, baroclinicity is a measure of the stratification in a fluid. A baroclinic atmosphere is one for which the density depends on both the temperature and the pressure; contrast this with barotropic atmosphere, for which the density depends only on the pressure. In atmospheric terms, the barotropic zones of the Earth are generally found in the central latitudes, or tropics, whereas the baroclinic areas are generally found in the mid-latitude/polar regions.

All content from Kiddle encyclopedia articles (including the article images and facts) can be freely used under Attribution-ShareAlike license, unless stated otherwise. Cite this article:
Baroclinic Facts for Kids. Kiddle Encyclopedia.