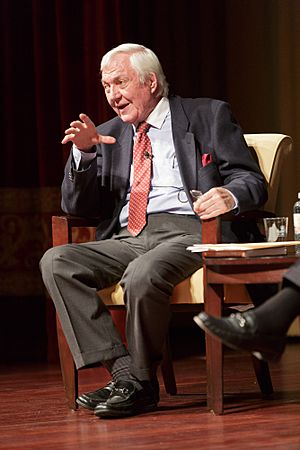 Barrie Dunsmore (1939 – 26 August 2018) was a Canadian journalist. He covered foreign affairs for ABC News, the American television network for 30 years. He was born in Regina, Saskatchewan.

Former Secretary of State Henry Kissinger said of Dunsmore's book, "This compilation of essays dating from the weeks when he accompanied me on the Midest shuttles in the early 1970's, to his commentaries on the Arab Spring will mark Dunsmore firmly as one of the significant journalists of our era."

All content from Kiddle encyclopedia articles (including the article images and facts) can be freely used under Attribution-ShareAlike license, unless stated otherwise. Cite this article:
Barrie Dunsmore Facts for Kids. Kiddle Encyclopedia.