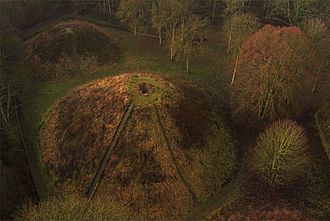 Bartlow Hills is a Roman tumuli cemetery in Bartlow, Cambridgeshire, England. Four of the original seven barrows remain; the largest three are accessible to the public, the northernmost and smallest is on private property and is not easily visible. The remnants of two more are visible as low mounds west of the three largest barrows. The tallest barrow is 15 metres (50 ft) high, and is the largest Roman barrow north of the Alps.

Excavations were undertaken in the 19th century (chiefly in 1832–40), discovering remains of large wooden chests, decorated vessels in bronze, glass and pottery and an iron folding chair (most of which were lost in a fire at Easton Lodge in 1847). A small Roman villa, occupied until the late 4th century, was situated north of the mounds and was excavated in 1852. The site saw no further work until a geophysical survey in 2006 and further excavations in 2007, but this work did not establish the location of the villa.

All content from Kiddle encyclopedia articles (including the article images and facts) can be freely used under Attribution-ShareAlike license, unless stated otherwise. Cite this article:
Bartlow Hills Facts for Kids. Kiddle Encyclopedia.