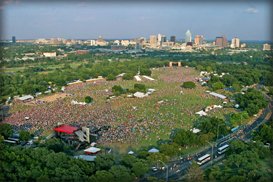 Barton Hills is a neighborhood in Austin, Texas. It is located in south Austin, and encompasses part of ZIP code 78704.

Barton Hills is bounded by South Lamar and Zilker neighborhoods to the east, Barton Springs Road and Zilker Park to the north, Barton Creek and the Spyglass-Barton's Bluff neighborhood to the west and the Capital of Texas Highway to the south.

Barton Hills is primarily residential, with the oldest homes dating back to the 1940s. Additionally, the area is home to several attractions including the Barton Creek Greenbelt nature preserve and the Umlauf Sculpture Garden and Museum. Just north of the neighborhood are Barton Springs Pool, a natural spring fed by Barton Creek, and the 351-acre Zilker Park.

In 1837, William "Uncle Billy" Barton set up his pioneer homestead near a natural spring on the southern bank of the Colorado River, naming the springs after his daughters Parthenia, Eliza and Zenobia. Their names did not stick, but William's did and 160 years later the springs, the pool and several popular Austin neighborhoods bear the name "Barton."

Established in the 1940s and 1950s with construction continuing through the 1970s to the late 1990s, Barton Hills is dotted with all kinds of homes. Barton Hills was featured in Austin’s 1956 Parade of Homes as “the world’s largest air conditioned subdivision.” Beginning in that year, it was platted as subdivision in six sections by S.R. Sheppard, Builders Development Corporation and others. Barton Hills eventually had 1,585 lots planned on its 535 acres (0.84 square mile).

All content from Kiddle encyclopedia articles (including the article images and facts) can be freely used under Attribution-ShareAlike license, unless stated otherwise. Cite this article:
Barton Hills, Austin, Texas Facts for Kids. Kiddle Encyclopedia.