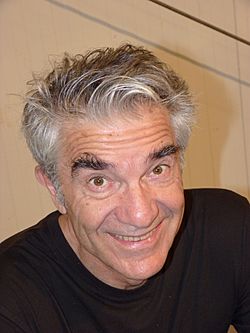 Hervé Barulea, also known as Baru, (born 29 July 1947) is a French cartoonist. He has Italian heritage. He was known for his debut in the magazine Pilote in 1982. In 2013, he was knighted a Chevalier of the Ordre des Arts et des Lettres. In 2010, received the Grand Prix de la ville d'Angoulême.

All content from Kiddle encyclopedia articles (including the article images and facts) can be freely used under Attribution-ShareAlike license, unless stated otherwise. Cite this article:
Baru (cartoonist) Facts for Kids. Kiddle Encyclopedia.