The hill is crowned by Bascom Hall, the main administration building for the campus. Near the main entrance to Bascom Hall sits a statue of President Abraham Lincoln. The first university building, North Hall, was constructed on Bascom Hill in 1851 and is still in use by the Department of Political Science. The second building, South Hall, was built in 1855 and is now used by the administration of the University of Wisconsin College of Letters and Science. The original buildings were designed by the architect John F. Rague. 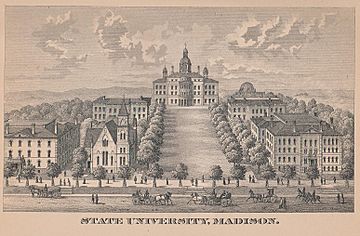 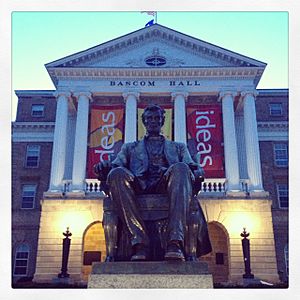 Bascom Hall and the statue of Abraham Lincoln

All content from Kiddle encyclopedia articles (including the article images and facts) can be freely used under Attribution-ShareAlike license, unless stated otherwise. Cite this article:
Bascom Hill Facts for Kids. Kiddle Encyclopedia.