John Bass (1891-1978) and Johanna Redlich (m. Feb. 21, 1921) were Jewish-immigrants from Vienna, Austria who resided in Miami Beach. As President of the Fajardo Sugar Company of Puerto Rico, John Bass was also an amateur journalist, artist (namely painting and etching) and composer of published music. Mr. Bass collected both fine art and cultural artifacts, including a sizeable manuscript collection that now lives in the Carnegie Hall Archives. In 1963, the couple bequeathed a collection of more than 500 works, including Old Master paintings, textiles and sculptures to the City of Miami Beach, under the agreement that a Bass Museum of Art would remain open to the public in perpetuity. The museum opened its doors on April 7, 1964. John Bass directed the museum from its founding until his death in 1978.

In 1980, art historian Diane Camber was hired as Executive Director of the museum. For the next thirty years, Camber worked to professionalize museum operations, obtain AAM accreditation, produce scholarly exhibitions and successfully run a capital campaign for a building expansion, developing the museum into a significant cultural institution. Renovations took place in 2001, and the building expansion was inaugurated with the exhibition Globe Miami Island in 2002.

In 2009, George Lindemann, Jr. became President of the Board of Directors and Silvia Karman Cubiñá was appointed as Executive Director. Aligning with rapid urban development of City of Miami Beach, support from the John L. and James S. Knight Foundation and the success of Art Basel Miami Beach, the museum converted to a 501c3 non-profit corporation.

In 2013, the museum announced a $7.5 million grant from the City of Miami Beach to begin a second phase of transformation and expansion. The museum closed for construction in May 2015 and re-opened on October 29, 2017.

In 2003, the museum presented a traveling exhibition titled, US DESIGN, 1975–2000, a critical assessment of the work of three generations of American designers during the last 25 years of the 20th century.

Under the leadership of Silvia Karman Cubiñá, Executive Director and Chief Curator since 2009, The Bass has presented such exhibitions as: 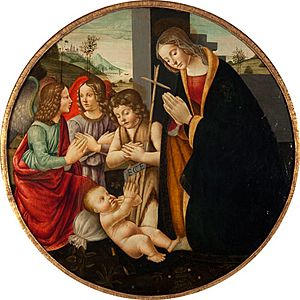 The Madonna Adoring the Christ Child with Angels and the Infant St. John the Baptist, attributed to studio of Domenico Ghirlandaio, in The Bass' permanent collection.

The Bass incorporates its founding collection into a schedule of international contemporary exhibitions. The museum’s permanent collection includes European painting and sculpture from the 15th century to present; 7th to 20th-century textiles, tapestries and ecclesiastical vestments and artifacts; 20th and 21st-century North American, Latin American, Asian and Caribbean art; photographs, prints and drawings; and modern and contemporary architecture and design with emphasis on the pre- and postwar design history of Miami Beach. The “Open Storage” gallery is dedicated to displays of the museum’s permanent collection, featuring a series of rotating artist projects that present works in dialogue with the collection. Pascale Marthine Tayou served as the first artist intervention in the space with his exhibition Beautiful.

From August 21, 2015 to July 17, 2016, a selection of artworks from the permanent collection were incorporated into an exhibition at the Lowe Art Museum at the University of Miami. Dürer to Rubens: Northern European Art from the Bass Museum included works that represent a range of media—including oil on canvas, tempera on panel, enamel on porcelain, and textiles.

In September 2016, The Bass launched a ten-year initiative to grow the museum’s holdings of international contemporary art within the permanent collection. The initiative was celebrated with two inaugural acquisitions of public art: Miami Mountain, 2016 by Ugo Rondinone and Eternity Now, 2015 by Sylvie Fleury. In August 2017, The Bass announced its third major purchase towards this initiative with Allora & Calzadilla's Petrified Petrol Pump (Pemex II), 2011.

In 2017, the museum’s Creativity Center opened as the largest art museum education facility in Miami-Dade, with three classrooms and various spaces to serve a regular curriculum of multigenerational programs.

All content from Kiddle encyclopedia articles (including the article images and facts) can be freely used under Attribution-ShareAlike license, unless stated otherwise. Cite this article:
Bass Museum Facts for Kids. Kiddle Encyclopedia.