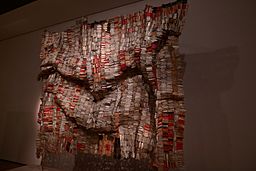 El Anatsui ([ah-nah-ch-wee], born 1944) is a Ghanaian sculptor active for much of his career in Nigeria. He has drawn particular international attention for his "bottle-top installations". These installations consist of thousands of aluminum pieces sourced from alcohol recycling stations and sewn together with copper wire, which are then transformed into metallic cloth-like wall sculptures. Such materials, while seemingly stiff and sturdy, are actually free and flexible, which often helps with manipulation when installing his sculptures.

El Anatsui was born in Anyako, in the Volta Region of Ghana. The youngest of his father's 32 children, Anatsui lost his mother and was raised by his uncle. His first experience with art was through drawing letters on a chalkboard. He trained at the College of Art, University of Science and Technology, in Kumasi in central Ghana. His work with sculpture and wood carving started as a hobby to keep alive the traditions he grew up with. He began teaching at the University of Nigeria, Nsukka, in 1975, and has become affiliated with the Nsukka group. Critic John McDonald has commented:

It has taken many years to find artists who can occupy a prominent place on the global circuit while choosing to reside outside the metropolitan centres. William Kentridge has made his reputation from Johannesburg, and El Anatsui has conquered the planet while living and working in the Nigerian university town of Nsukka.

Anatsui uses clay, wood and found objects to create sculptures based on traditional Ghanaian beliefs and other subjects. He has cut wood with chainsaws and blackened it with acetylene torches. After Anatsui's move from Winneba to Nsukka to pursue a career in education at the University of Nigeria, wood became less accessible to him. This drove him to pursue clay as a medium. His "Broken Pots: Sculpture by El Anatsui" was a series of vessels formed from shards of existing and created pottery. This series was Anatsui's first experiment with using many parts to create a whole, often providing new context or meaning to the pieces he was using.

More recently, he has turned to installation art. Some of his works resemble woven cloths such as kente cloth, but are intended as sculptures, not textiles. These works are made from found objects, usually metal bottle caps which are tied together with wire to create vast sculptures that resemble tapestries. Anatsui incorporates "Adinsubli", a portmanteau of uli, nsibidi, and Adinkra symbols, alongside Ghanaian motifs, into his works. 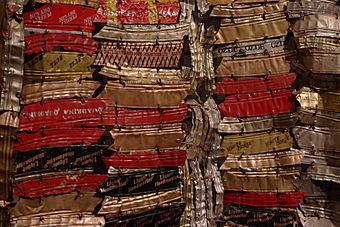 Anatsui said that in developing his art he looked for "something that had more relationship to me, as someone growing up in an African country". He wanted to "draw connections between consumption, waste, and the environment". According to Anatsui, "Art grows out of each particular situation, and I believe that artists are better off working with whatever their environment throws up".

A Western art critic has said that Anatsui's bottle tops could be compared to "Duchamp's bicycle wheel" and "recall disparate Modernist sweet spots without quite settling into any familiar category."

Anatsui's career grew gradually, starting in his home village of Nsukka before branching off to places such as Enugu and Lagos, and eventually internationally. In 1990, Anatsui had his first important group show at the Studio Museum In Harlem, New York. He also was one of three artists singled out in the 1990 exhibition "Contemporary African Artists: Changing Traditions", which was extended for five years. 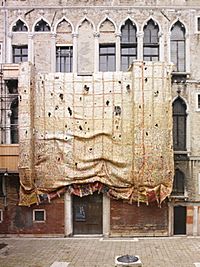 In 1995, Anatsui held his first solo exhibition outside of Africa in London. He expressed a variety of themes and demonstrated how African art can be shown in a multitude of ways that are not seen as "typical" African. His work utilized conceptual modes used by European and American artists but hardly in African countries. Anatsui showed his work at the de Young Museum in San Francisco in 2005. This was his first time "appear[ing] as part of the permanent collection in a major art museum". Also in 2005, his exhibition at New York's Skoto Gallery, "Danudo," was the first display of his metal sheets in an American city. At this gallery, Skoto Aghahowa presented Anatsui's wood wall panels alongside Sol LeWitt's drawings. This exhibition popularized his bottle-cap works as he gained more recognition in the press.

Anatsui was invited to the Venice Biennale in 2006 and again in 2007 where he was commissioned to make two hanging metal tapestries. During the 2007 edition, he exhibited his works at the Palazzo Fortuny which consisted of newly built walls for him to display three metal hangings entitled Dusasa. Each artwork demonstrated different textures and colors including golds, reds, and blacks. The way the bottle tops draped throughout the hangings created a sense of gentleness that made it stand apart from the other works in the gallery. The art curator of the Biennale, Robert Storr, mentions that the artist's series "reaches back into a whole series of things in the postwar period-it has a kind of exaltation I have not seen before". During this Venetian showing, Anatsui wanted to create a new experience for his viewers conceptually. He believes that "human life is not something which is cut and dried. It is something that is constantly in a state of change." At this point, he began to refer his metalworks as hangings instead of "cloths".

A 2010 retrospective of his work, entitled When I Last Wrote to You About Africa, was organized by the Museum for African Art and opened at the Royal Ontario Museum in Toronto, Ontario, Canada. It subsequently toured venues in the United States for three years, concluding at the University of Michigan Museum of Art.

A major exhibition of recent works, entitled Gravity & Grace: Monumental Works by El Anatsui, had its New York premiere at the Brooklyn Museum in 2013. Organized by the Akron Art Museum (exhibition: 2012), the exhibition later traveled to the Des Moines Art Center (2013–14) and the Bass Museum of Art in Miami (2014).

A career-spanning survey of his work, entitled Triumphant Scale drew record-breaking crowds when it opened, in March 2019 at Munich's Haus der Kunst. From there, the show travelled to the Arab Museum of Modern Art, in Doha, and later to the Kunstmuseum Bern in 2020.

Anatsui was selected to be a member of the International Society for Education through Art (InSEA) world council in 1992 for his work in education. Anatsui was a founding member and fellow of the Forum for African Arts in 2000. That year he also became a member of the International Selection Committee for the Dakar Biennale in Senegal. In 2001 he was a fellow at the Civitella Ranieri Foundation in Italy.

Anatsui won an honorable mention at the First Ghana National Art Competition as an undergraduate student in 1968. The following year he was awarded the Best Student of the Year at the College of Art in Kumasi, Ghana. In 1983 he won a commission for two large public sculptures made of terrazzo-surfaced cement on the Nsukka campus. He was selected to be one of ten artists invited to the Zweites Symposium Nordesekkuste residency in Cuxhaven, West Germany, in 1984.

In 1990, Anatsui was invited to the 44th annual Venice Biennale show 5 Contemporary African Artists, where he received an honorable mention. That year he was included in the American documentary Nigerian Art-Kindred Spirits.

In 2015, the Venice Biennale awarded Anatsui the Golden Lion for Lifetime Achievement. In 2017, Anatsui was awarded the Praemium Imperiale, the first Ghanaian to win this international art prize.

All content from Kiddle encyclopedia articles (including the article images and facts) can be freely used under Attribution-ShareAlike license, unless stated otherwise. Cite this article:
El Anatsui Facts for Kids. Kiddle Encyclopedia.