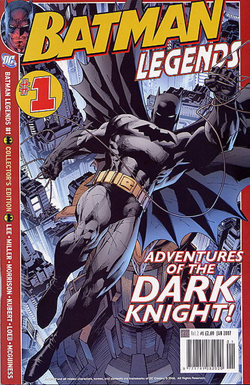 Batman Legends (retitled to simply 'Batman' for its third and fourth volumes) was a monthly anthology comic book series published in the UK by Titan Magazines as part of their DC Comics 'Collector's' Edition' range. Initially published by Panini Comics for 41 issues between October 2003 and November 2006, Titan subsequently took over publication with the launch of the comic's second volume. The title reprinted Batman-related comics originally published by DC Comics in the United States, typically including three stories per issue in a serialised format.

Titan ceased publication of all their DC Comics titles in December 2018, ending a fifteen-year run for 'Batman'.

It also contained numerous creator profiles, competitions and a review of Batman Begins.

Volume Two was published by Titan Magazines and was edited initially by Rona Simpson, later by Ned Hartley. Along with the customary three strips per issue, Batman Legends included a fan letters page, along with a feature on Batman-related merchandise titled 'Inside the Batcave'. As with each of Titan's DC titles during this time, each issue also included the 'Roll Call' feature which spotlighted various DC graphic novels and included a 'Hero of the Month' panel. 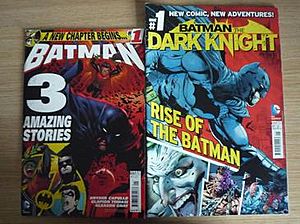 Volume two ended after 57 issues in June 2012 and was retitled to simply 'Batman' for volume three. Now edited by Andrew James, the first issue of the new format was released on 5 July 2012, the same day as the first issue of Titan's new secondary Batman title, Batman: The Dark Knight. The title began printing the New 52 Batman and Robin series whilst also continuing to reprint ongoing pre-New 52 storylines. It later showcased strips from Nightwing and Batman Eternal, as well as other Batman-related spin-off series. Some longer US issues such as annuals and those with 'back-up' strips were published across several issues by Titan due to page count restrictions. Titan celebrated fifty issues of Volume 3 in April 2016.

Volume 3 reprinted the following US issues:

Titan would relaunch 'Batman' from issue #1 once again in October 2016, now printing stories from the DC Rebirth publishing event. This fourth volume ran for fourteen issues and would also prove to be the title's final, with Titan ceasing publication of all their DC Comics titles in December 2018.

Titan launched a secondary Batman title in July 2012, initially titled Batman: The Dark Knight and occasionally referred to as simply 'The Dark Knight', which began by reprinting the US New 52 titles Batman: The Dark Knight and Detective Comics. The title would be rebranded several times before its 2018 cancellation, first relaunching in January 2014 as Batman: Arkham. Gotham Central would subsequently replace that title, before it was again rebranded as All-Star Batman in February 2017, coinciding with the launch of DC Rebirth.

All content from Kiddle encyclopedia articles (including the article images and facts) can be freely used under Attribution-ShareAlike license, unless stated otherwise. Cite this article:
Batman Legends Facts for Kids. Kiddle Encyclopedia.