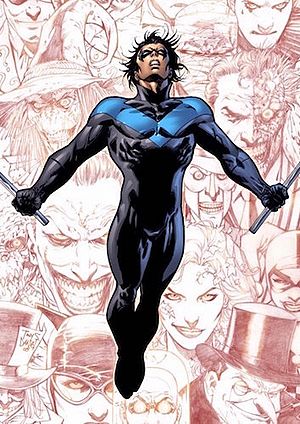 Nightwing is a name that has been used by several fictional characters in the DC Comics Universe. The name was used early on with characters related to Superman. Superman was the first to use the name. The most well know use of the name for a character was the original Robin, Dick Grayson. The Comic book Nightwing, about this version of the character was printed from 1996 until 2009. A new volume of the comic has been published from 2011 and is still being published today.

All content from Kiddle encyclopedia articles (including the article images and facts) can be freely used under Attribution-ShareAlike license, unless stated otherwise. Cite this article:
Nightwing Facts for Kids. Kiddle Encyclopedia.