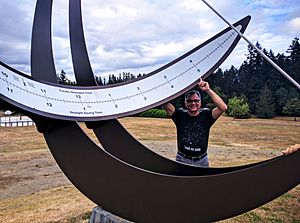 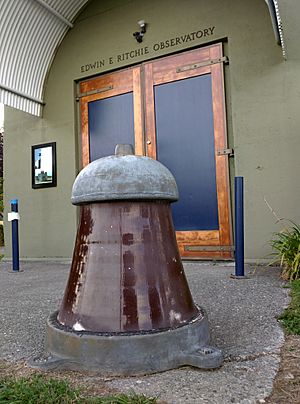 The Edwin E. Ritchie Observatory front door, with an insulator from the original extremely low frequency transmitter that was in that location during WWII for communicating with American submarines

Battle Point is a community of Bainbridge Island, Washington, located on the western side of the island. The northern part of the neighborhood extends to Arrow Point. Battle Point also contains the communities of Tolo and Venice.

Battle Point is named for a battle when the local Suquamish tribe under chief Kitsap fought off a band of marauders from the north. Arrow Point, forming the western shore of Manzanita Bay, is named for its sharply pointed shape.

All content from Kiddle encyclopedia articles (including the article images and facts) can be freely used under Attribution-ShareAlike license, unless stated otherwise. Cite this article:
Battle Point, Bainbridge Island, Washington Facts for Kids. Kiddle Encyclopedia.